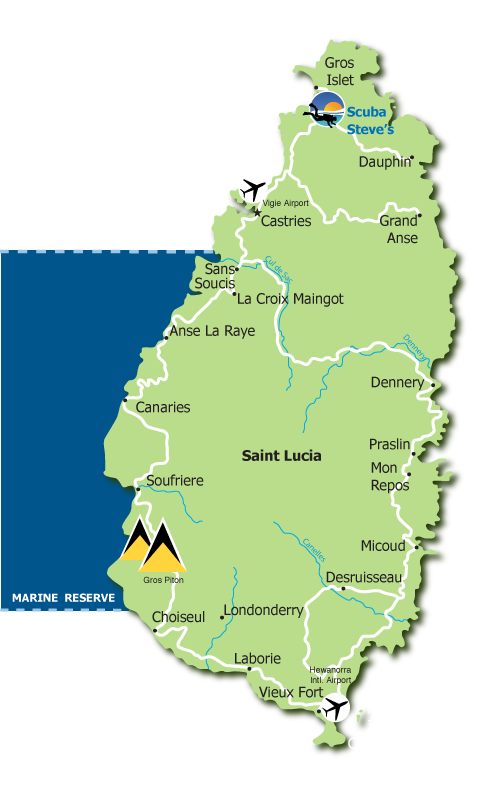 St. Lucia is a volcanic island with stunning scenery above and below the water. The majestic twin Pitons, our world famous landmarks, rise to over 2619ft/805M, dominating the southern end of the island by the Soufriere diving/snorkeling sites. Underwater we have white sand, volcanic pinnacles, sheer walls, shipwrecks and pristine coral reefs with a multitude of colorful fish and marine life.

The 15 diving/snorkeling sites below are all in the Marine Reserve which extends about 12 miles from Anse La Raye to Soufriere. We have sites suitable for all levels from absolute beginner to avid dive nut. Depths range from 5ft/1.5M to around 140ft/43M and sea temperatures range from 79 – 85 F/26 – 29 C. Visibility varies from 20ft/6M to over 200ft/60M depending on the site and weather conditions

For those who prefer to snorkel, many of the sites below have beautiful shallow reefs with an abundance of fish and aquatic life easily visible from the surface. Unlike many popular dive destinations, St. Lucia is very concerned with conservation and the Soufriere Marine Management Agency protects the reefs which means that they are still very beautiful for snorkeling and diving. Saint Lucia has some of the best diving and snorkeling sites in the Caribbean and they are never crowded with divers. Come and take a look, we promise you won’t be disappointed.

These diving sites are the ones that we normally visit on Standard Service in Anse Cochon.

These are the Dive Sites that we visit on Premium Service in Soufriere by the Pitons.
Book Now <![endif]-->